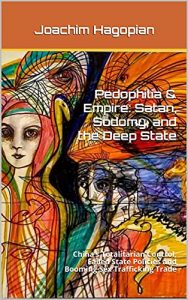 Just as the early globalists a full century ago, aka the internationalists Jacob Schiff, Averell Harriman, JP Morgan, the Warburgs, Rockefellers and the Rothschild central banksters all financed and backed the Bolshevik Revolution that triggered the rise of the Lenin-Stalin Communist bloodbath regime as their controlled opposition,[1] the same usual suspects from Yale University’s Skull and Bones Society also created the Maoist monster of Communist Red China,[2] who equaled his Russian Communist cohorts’ all-time record,[3] slaughtering 65 million of his own people.[4] Not only was Mao Zedong China’s “Great Helmsman” demigod, groomed and embraced by New World Order proponents,[5] he was also reputedly a rabid child rapist of virgin ingenues as young as 14 with a switch-hitting hardon for young boys as well. The most murderous despots in human history were created by the Rothschild clique, the same Lucifer worshipping controllers that have backed both sides to every war of the last few centuries. And just as they’re behind every war, they are the beneficiary overlords of the global Satanic Pedophilia Network.